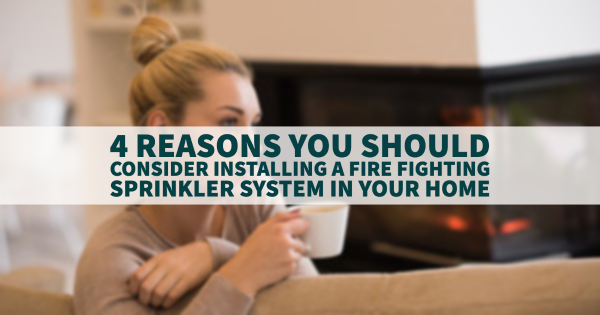 Approximately 27% of all fires reported in the United States each year happen in the home. Fire sprinkler systems have been used for many years to save lives and prevent property damage. Without this protection, you can lose everything you own and love within less than five minutes. These systems can reduce the risk of death by 80% when installed in your home. Here are four reasons why you should consider installing a fire fighting sprinkler system in your home.

How Does a Fire Fighting Sprinkler System Work? 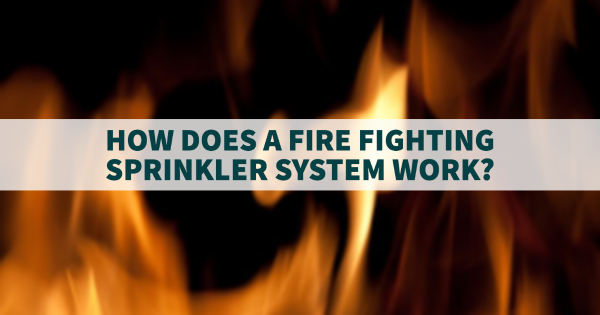 A fire fighting sprinkler system extinguishes fires through a series of three rapid steps. Its first job is to detect temperatures that are between 135 to 165 degrees Fahrenheit. When these temperatures are detected, a network of piping in ceilings and walls opens up valves within the sprinkler head. This activates a spray of 10 to 25 gallons of water per minute to extinguish the source of the fire, such as fire pits, that have further developed. Only the sprinklers that are closest to the fire become activated to reduce the risk of severe property damage from smoke and water damage.

There are three main types of residential fire sprinklers systems that you can choose from. Wet sprinklers that use water to douse fires are the most popular choice for many homeowners. They can last at least 20 years with minimal to no maintenance. In areas of low temperatures, they may freeze and can also leak if damaged by a forceful impact. These systems can either share the home’s piping system or its own separate piping connected to a storage tank.

A dry fire fighting sprinkler system fills pipes with nitrogen or pressurized air, which keeps the valve inside closed. When a fire is detected, the pressurized air or nitrogen escapes, releasing the valve. Water then sprays out after a 60-second delay to extinguish the fire. This type of system can be beneficial in areas prone to freezing temperatures. These systems can be harder to maintain because they need to be cleaned and dried after each use to prevent corrosion.

There are also non-water fire sprinkler systems that use clean agents like inert gas instead of water. These systems can be ideal for homeowners who are concerned about water damage affecting any valuable property or sensitive electronic equipment. The clean agent used in the sprinkler system is non-corrosive and electrically non-conductive. It is safe to be used around people and doesn’t leave a residue behind. These systems are typically used for businesses but there are some that can be used for residential purposes.

1. The Fire Fighting Sprinkler System Alerts and Protects Your Family 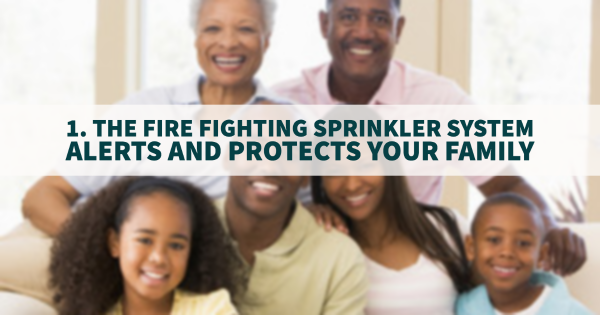 To protect your family from a fire, it is important to plan ahead with the right equipment and strategy in place before this devastating event can occur. The fire sprinkler system design instantly alerts you and your family so you can escape from harm. According to the National Fire Protection Association, approximately seven million household fires occur each year where emergency services aren’t called for assistance. Homes that contain a fire fighting sprinkler system reduce the risk of civilian death by around 81% and minimize injury by 79% for firefighters. Property damage can decrease by 58% on average.

A fire fighting sprinkler system features an alarm that sounds when activated to help you protect your family. Some systems can also alert the fire department when a fire activates it. This gives your family enough time to escape to prevent any injuries or death. The spray will help keep the heat from the fire down and give you enough air to breathe in order to make a quick exit. It can completely extinguish the fire before firefighters can arrive to put out the flames.

Many new homes include fire fighting sprinkler systems within the home interior renovations. The cost to install one of these systems can vary depending on a number of factors. The typical cost for a 1000 square foot home is around $1,500 on average. The cost can be higher if there is difficulty in running the pipes or there isn’t an adequate water supply. The total cost can also be affected by the number of sprinkler heads that are needed and the types of materials used. You may want to get several estimates from licensed fire fighting sprinkler system contractors first before agreeing to an installation.

2. Your Kitchen Is Used Very Often 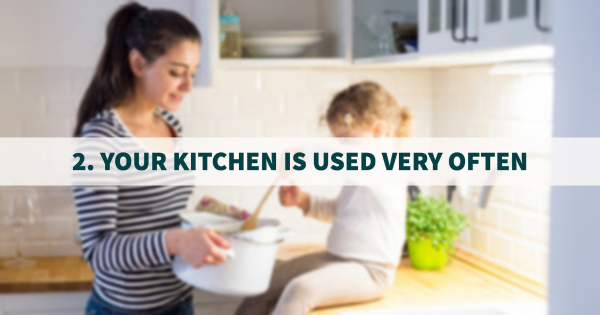 The majority of house fires happen in the most used area of your home, which is the kitchen. These kitchen fires are typically the leading cause of fire injuries. They can cause the least amount of damage because, usually, someone is present to put out the fire before it gets out of hand. The most common causes of fires that happen during the night, including discarded tobacco products, fireplace sparks, and space heaters placed too close to furniture. Since the majority of fires happen to occur in the kitchen, you may want to think about having fire suppression systems installed by a licensed kitchen remodeling contractor.

According to research from the National Fire Protection Association, almost half of all residential fires involve the use of kitchen cooking equipment. In Virginia, a fire fighting sprinkler system limited the number of damages from an apartment kitchen fire. The fire was caused by unattended food left on the stove. The fire sprinkler system was able to extinguish the fire before firefighters arrived. If the fire system hadn’t been installed, numerous residents could have died and thousands of dollars worth of damage could have been caused to the property.

3. You Have Young Children 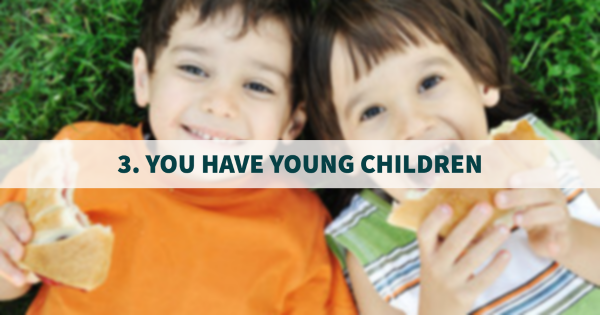 Young children who play with lighters or matches can often be the leading cause of a residential fire. Children can also accidentally start fires when attempting to cook with appliances on kitchen countertops or trying to use other electrical equipment. If a fire occurs in the home, many children will often try to hide somewhere in the home rather than try to escape. Besides installing a fire fighting sprinkler system in your home that can help protect them, you may want to conduct regular fire drills as well. This can save you time from trying to find where your children are during a fire so you can get them out safely.

A family with special needs children was recently saved by a residential fire fighting sprinkling system in their Maryland home. The family had adopted children whose illnesses left them bedridden and on ventilators. These children would be unable to evacuate on their own without assistance. The family was encouraged by the city’s fire marshal to install a residential fire system, which was donated and installed by a local fire sprinkler company. Fire alarms were also installed during this time.

At the time of the incident, firefighters were dispatched to respond to a residential structure fire with trapped occupants inside. When they arrived, the rear side of the home was engulfed in fire. The family was found huddled together on the second floor. Even though there was a raging fire above their heads in the attic, the fire fighting sprinkler system had managed to keep the room’s temperature down. This bought enough time for the firefighters to safely evacuate the family.

The fire marshal who inspected the home afterward noted that the first floor sprinklers kept the fire from entering a downstairs window. If the fire fighting sprinkler system hadn’t been installed, the fire would have quickly spread throughout the house. The upstairs sprinklers were activated by the heat from the attic. The fire marshal also noted that the sprinkler system prevented several opportunities for the fire to get inside the home. The family suffered no serious injuries as a result of the fire.

Your homeowners insurance policy can provide a significant discount if you have an automatic fire fighting sprinkler system installed in your home. Potential discounts can vary among homeowners insurance companies. Your homeowners insurance can not only cover damages caused by the fire, but also any water damage from the fire suppression system as well. You may want to review your policy to make sure you understand what coverage you may have in the event of a fire. It may also be a good idea to speak with your insurance agent and shop around with other policies.

4. Your Elderly Parents Live in Your Home 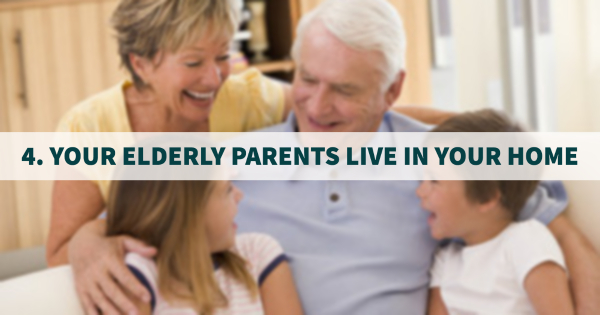 Many families have elderly loved ones living with them because they are unable to afford an assisted living program or nursing home. Approximately half of the people killed in residential fires are over 65 years old. Most victims die from smoke inhalation than from the fire itself. The toxic gases emitted from the fire can significantly slow a person’s reaction time. Having a fire fighting sprinkler system can help alert elderly people with limited mobility who are sleeping to have enough time to escape the effects of a fire.

Fires can also create issues with being able to wake up in order to evacuate. Smoke inhalation can cause decreased alertness from low levels of oxygen. The smoke from a fire can often cause deadly damage before the fire can reach an individual In North Carolina, a man was saved recently by a deadly fire caused by an electric wheelchair while he was sleeping in an adjacent room. When firefighters arrived, the smoke had completely filled the home to the point the crew couldn’t see their hands in front of their faces.

The firefighters found the man still asleep and were able to evacuate him. The fire fighting sprinkler system had put out 95% of the fire before the crew arrived. If the system hadn’t gone off, the man would no longer be here today. The man did lose all his possessions in the fire and was forced to stay in a hotel room until his home could be restored. He expressed how grateful he was for the fire sprinkler system giving the firefighters enough time to save his life.

If there is an elderly person in your home who has an upstairs bedroom, you may want to rethink their sleeping arrangements. If they need to use a stair climber or lift, it could delay their ability to safely evacuate within the three to five minutes you have to escape during a fire. It may also be a good idea to create an emergency bag filled with necessary prescriptions and clothes. In the event of a fire, you can quickly grab this emergency bag while helping your elderly loved one evacuate. It may also be a good idea to practice fire drills in case an emergency occurs.

A residential fire can happen at any time for a multitude of reasons. It’s important to be prepared by having a fire fighting sprinkler system installed in your home. It can help save you and your family’s lives and most valuable possessions. A fire sprinkler system can be one of the most valuable investments you can make for your home and family. Start researching today on how you can get a system installed in your residence today.